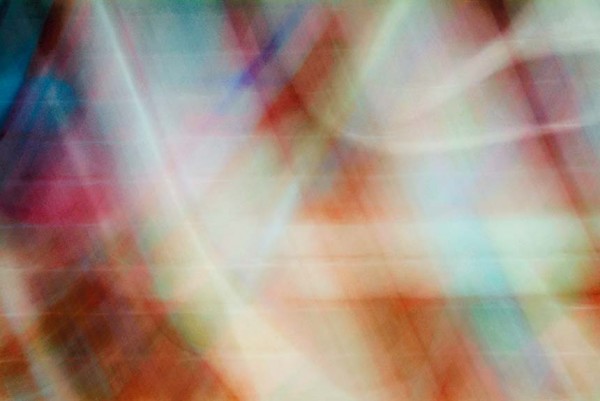 People are often curious how I make my images. Several years ago I was showing prints from my Metro Motions series when someone came up to me and asked how I made my paintings. To which I replied they aren’t paintings, they’re photographs. They looked stricken as if I’d slapped them and without another word turned and left. In some respects these images could metaphorically be considered paintings but from a technical perspective because I’m using a camera to create them, I classify them as photographs. Tomato tomato, potato, potato. Is this distinction important? I don’t think so.

I began a project of images of the city while driving at dusk. I found the best images came at the end of rainstorms when everything is glassy smooth and reflective with water. Because it was almost night I was shooting with long exposure times – sometimes several seconds and because I was driving and hand holding my camera every light in the image made squiggly lines. This method gave me my source images for Metro Motion.

At the time I had worked out a visual simulation using Photoshop, that was in some respects similar to cross-processing positive film in negative film chemistry. Cross-processing inverts the film colours in a beautiful and somewhat unpredictable manner. I liked the method I had devised in Photoshop and used it to convert the source night driving images from dark banal light streaks into bright, colourful images full of motion and detail.

Some time later I began thinking about how I could simplify the visual environment of the city into it’s component shapes and colour. It struck me that I could do exactly that by shooting out of focus – this work became the Coloured City project. I very specifically wanted to photograph in daylight as an antithesis to the night work I had done with Metro Motion.

I had just purchased a 3 megapixel point and shoot camera with manual control including manual focus, so I used that as my test camera – because it gave immediate feedback – to iteratively experiment and discover the optimal settings and subject matter for the project. It was such a seductive way to shoot that I just kept going and over the course of several days captured all the source images I needed.

Again I was driving, but this time the images were normal duration exposures so there was no or very little visible motion captured in the images. But because I was moving/driving this increased the frequency of possible subject matter to the point my camera was too slow to keep up – it was after all a point and shoot with shutter lag.

Most recently for the Light Signatures project, I had a vision of lateral coloured streaks running diagonally across the frame, very specifically capturing the induced motion of my passage through the coloured objects of the city. I used a fusion of methodologies from Metro Motion and Coloured City.

This time I rode my bicycle instead of driving which slowed the pace of change around me, giving me greater opportunity to capture what I was visualizing. I experimented using a digital SLR camera finding ways to reduce it’s light sensitivity so I could have long exposures in daylight and over the course of several months of daily shooting, worked out camera movement patterns, light conditions and subject material. I finished both the Coloured City and Light Signatures source images using Photoshop to paint layer masks so I could massage the intensity and colour of individual visual elements within each image until the balance matched my original vision.