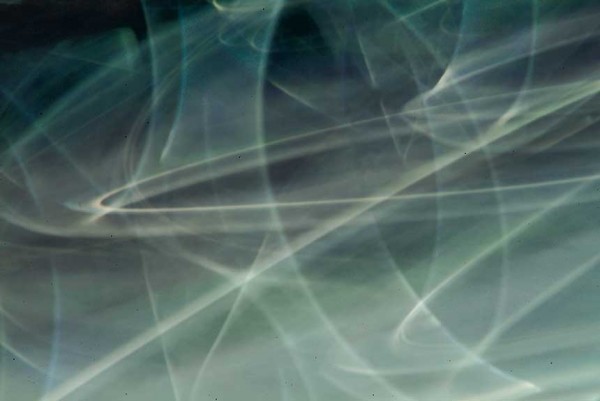 I’ve begun to step away from the simpler smear images in the Light Signature series that I’m currently collecting material for. I’m now manipulating the camera in patterns that I think up on the spot as I’m riding –  which is surprisingly difficult, considering that most of my concentration is devoted to defensive driving and looking out for all manner of dangers – with a portion reserved for identifying interesting material to photograph – not to mention the extra difficulty of balance and control since one of my hands is clutching the camera instead of the handlebars.

Nooo, I’m not reeling all over the road like you’re imagining or swinging my head wildly from side to side looking for new material, ignoring traffic, parked cars and pedestrians. I actually do want to stay alive while I do this so I have a slightly more conservative approach – well, conservative for me.

The important thing is the images are changing in really interesting and beautiful ways and its forcing me to re-examine the things I’ve been seeing and photographing. I am photographing essentially the same things now every day – mostly because my route to the studio is the same and because a lot of the things that draw my attention are static and unchanging from day to day. Although there are some things that are dynamic, like the vehicles and people but the majority of what I’m seeing along the way are buildings and urban structures.

I think this is partly why I began to vary my process. I was starting to see the same type of images appear and was getting bored with the sameness of it. That and the green blue lines image opened the door to new possibilities for me. Since then I’ve begun to experiment with movement to bring the added dimension of shapes to these images like the one above.

What do you think?