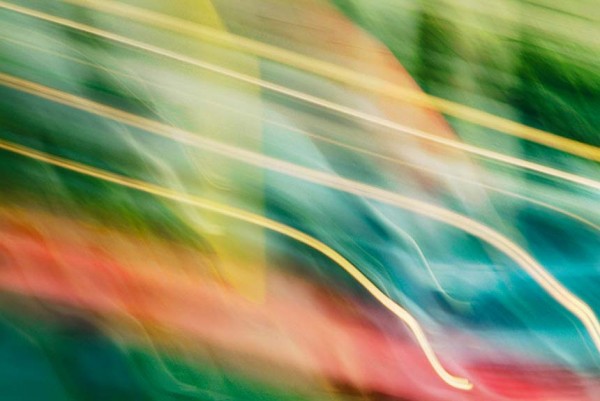 While I was working on this image I had another visualization – in a way a kind of progression of this work. It’s a combination of something I’ve seen and done before with elements of what I’ve done here with the motion streaks. It was a recognizable urban scene with the streak blurs like a misty layer laid over top so the underlying source for the motion isn’t completely obscured as it is in this image.

I’m not totally loving the idea now that I try to deconstruct and describe it to you. Seems too easy and not meaningful enough – too banal. Still, shooting for this body of work has led me down some interesting alleys and branches that I hadn’t originally intended and even the images that ARE in line with my original idea are much better than I had anticipated or hoped.

I began to shoot again this past week and weekend but even though its been only a year since I last gathered images for this work I’ve already forgotten the details of how exactly I was getting the look I wanted. I’ll have to experiment with the shutter, aperture, film speed and camera movement combination again until I narrow down the optimum settings, actions and lighting conditions to get some more of the streak images I want.

I think I want to fully explore the streak idea and present that as a complete set of work before I venture further afield into the shapes and articulations like today’s image – they are more of a separate sub-idea.

I was also revisiting the Dividing Lines idea (in my mind) that I did some tentative shooting for a few years ago. I wasn’t happy with those shots – too many recognizable elements in the foreground detracting from the overall effect and reducing the subtlety of the colour divisions. In fact, there are some interesting similarities to that idea and the streak idea from this work. The principle difference is in how I capture the look and the simple fact that the lines are all horizontal in Dividing Lines.

I think also I know the exact location to shoot from – whereas in the past I was shooting wherever I could find a clear space along the waterfront on my ride in to the studio. It needs a clear unencumbered view of the water and sky and I think I can get that from the Humber River pedestrian bridge – good height, clear view of water and sky with nothing in the foreground. At some point I’ll get back to gathering images for that body once I test out that location.